The Years, The Days, This Weekend

I’ve just finished another major milestone of the school year – this term’s reports. And not to ride on my sister’s coattails – since I actually turned her on to the book – but really relating to her post today, quoting Gretchen Rubin (of The Happiness Project) who’s major ah-ha moment was ‘the days are long but the years are short.’

I think every year it feels a bit more like that, but as my own mortality smacks me in the face a little harder these days, it makes sense to think along those lines and do what feels right as a result. Whether that means being nicer, working smarter, making time for people I love and like, or just doing the creative and genuine things that mean most to me, I need to consider my time and space.

This weekend I’m going to the Olympics in Vancouver! It was a very last minute decision, based more on a ‘why waste this nearly once-in-a-lifetime opportunity’ than the kind of naysaying that says ‘it’s too hard and too expensive to go so far for just a quick weekend.’ Instead, we decided that it was worth the time, effort, and money, and we would just go for it. After all, we might be in our seventies by the time the Olympics come back to Canada! We’ve gotta go!

P.S. I’m knitting red mittens for my twin – who in her blog – http://www.nonewfortara.blogspot.com has recounted her red Olympic mitten tribulations. They aren’t official Olympic merch, but they’re made of a rich pashmina red yarn, and she already loves them, in their half complete state. And, there’s no way they can be quite as mismatched as my original freakshow pair. Go Canada!

1 Comment | posted in Mittens, The Years Are Short, Vancouver 2010 Olympics

In all it’s handknit glory. Try as I might, I could not find a store-bought cover in the right miniature size for this teensy computer. So now I’ve created the well matched combination of my very own knitting cradling my writing machine in cushioned safety.

I often think of my novel-in-progress as I do my knitting works-in-progress: there are holes with the potential for unraveling the whole. Those are the ones I’ve got to find and stop up. Then there are the stitches that hold everything together. Not necessarily the noticeable ones, but the ones with all the strength and structure weighing on their shoulders. Those are the ones I want to test – pull at and see if they hold fast and stay true.

Here’s my lenten vow, made in some haste, and no doubt to be repented at leisure (as per ma belle jumelle): I’m going to stop taking taxis to work. This will take some effort on my part, and will provide considerable relief to my pocketbook. Not sure if I can tackle too many other vows, but I’m trying to stay positive. This one won’t be affected by my trip to the Olympics next weekend either! Very excited about this opportunity, as afforded by my lovely and loving husband.

So, for the duration of Lent, I will rise a little earlier, and spend much less money, but a lot more time, getting to work.

Not sure my fingers are up for this challenge, but I am certainly considering it. Like the idea of making something and not buying it. And the anatomical heart is so much more masculine than the commercial heart. Of course, my husband doesn’t need any extra hearts, because he’s already got mine. But this is pretty adorable. http://www.knitty.com/ISSUEwinter08/PATTheart.php 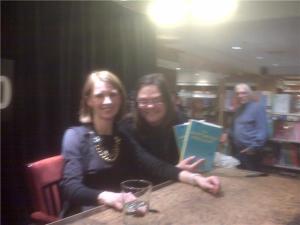 Tonight I went to hear Gretchen Rubin speak at Indigo in Toronto. She was lovely and warm and friendly and encouraging. She even remembered my twin’s buy nothing new blog! Took time to make personal comments and offer support. Kind of amazing really. http://www.nonewfortara.blogspot.com She was very open to getting a photo. Apologies for fuzzy blackberry photo quality.
Such an energizing and happy encounter, however brief! She’s the real deal. Thanks, Gretchen.