30th Anniversary of Breakfast Club – Nothing Simple About Those Minds 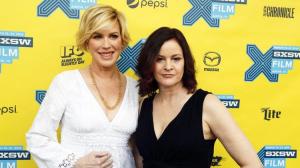 I’m going to try to do a few things in this post. First of all, thanks to Eileen On at http://www.eileenon.wordpress.com for nominating for a new blogging challenge: 5 Photos – 5 Days. She encouraged me to share more from my SXSW experiences in Austin, Texas, which I’ve been slow to do, since the end of South By Southwest coincided with my return to teaching full time after 9 months off – a jarring jolt of a time, to be sure.

The second thing I’m going to try to do is incorporate some videos into this blog for the first time ever! My Banff Centre friends would be so impressed – if it works, that is!

During SXSW 2015, a real highlight for me was the 30th anniversary rerelease of Breakfast Club. If you came of age in the 80’s, this movie was your touchstone (first date, anyone? anyone?) and John Hughes had plugged into your psyche, and was downloading (before that was even a thing) your emotional topography. They screened it at The Paramount – an historical theatre in Austin, and the venue for the biggest SXSW Film Festival events.

We were greeted with pink doughnuts 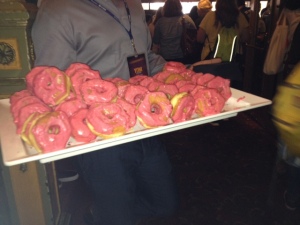 and a choir of elementary schoolers singing a gorgeous acoustic version of Don’t You Forget About Me,

and finally, a real live interview with Molly Ringwald and Ally Sheedy! I was beside myself when I realized that Molly and Ally were right beside me – that’s how dark it was. They were adorable, and I am hopefully going to be able to share a tiny bit of their interview. My photos are poor quality, and the video amateurish, but what a delight to have been there, and in those good seats! My 16-year-old self would have spontaneously combusted!

Here’s Ally Sheedy talking about that sandwich – the one she poured pixie stix onto and crushed chips and who knows what else. (at least she saved the dandruff for her art work)  *** APOLOGIES – CAN’T ATTACH VIDEO…Working on it!

And here’s Molly Ringwald talking about John Hughes, who must have considered her a major muse. *** MORE APOLOGIES – working on attaching video! Wrong format 😦

I loved the part when both actresses talked about how John Hughes basically (and quietly) (and individually) told everyone in the cast that “Really, I was you…” so that they all felt his most personal connection was to their character! I won’t forget about them. I just wish you were all there too.

Also, Molly mentioned that she had watched Breakfast Club with her 11 year-old daughter last year and interviewed her before, during, and after for a podcast for This American Life. On my way to check that magic out NOW! Like I said, nothing simple about those minds.

You might love reading the long form narrative of novels; you might prefer the brief staccato punch of twitter updates and texting. Wherever your literary loyalty lies, picture the profound impact

of a sudden loss of your basic literacy: you can’t navigate the internet, you can’t fill out job applications or government forms or do simple math; your options are rendered terribly limited. I’m doing the Muskoka Novel Marathon again this year, in support of Adult Literacy. Last year, we raised $23,000 & changed some lives – AND – total gravy – I won the manuscript contest! Please support me in this very worthy and uplifting cause, so close to my heart:
https://www.canadahelps.org/…/tena-laing-at-muskoka-novel-…/